Social and mainstream media has been awash with the impact the COVID-19 (or Coronavirus) has had on everyone’s everyday lives; with sporting fixtures and events being postponed or cancelled across the board.

It’s not often that agencies would write about events or projects where they fell through; there’s no quantifiable result and the lack of big sexy numbers, well-shot photos or even a kick-ass awesome post-production video means it makes the whole case study write-up a bit… well… pants. But, I’m so incredibly proud of what we achieved for our client, Bethesda UK, how could I not celebrate the phoenix that rose from the ashes?

It was a simple brief, which can often make the project harder to deliver as you’re not having to exceed a vision the client already holds. You have to make it from thin air and hope it sticks the landing.

The event was for Bethesda UK’s community and fanbase to celebrate the composer, Mick Gordon, and the iconic soundtrack from their 2016 release of DOOM; all delivered for a very modest budget. Oh, and the game was out on the 20th March, which – at the time – was mere weeks away.

We received the brief after several attempts by the client to work with other suppliers; we were warned this was a dead case… and to pull something together would be a miracle.

We decided to approach our contacts within the world’s leading music labels and see whether there was any interest. Thankfully, two of the most notable and influential labels threw bands our way so we had a pick of the very best.

Being fans of the game and keen to get involved, Higher Power had the sound and energy this gig needed. Besides which we had the full social support of heavyweight label Roadrunner Records which had agreed to be a partner on the gig.

Next, we sought out support acts to really get the music going and secured the local talent, Wargasm (UK), and Meansteed. This was gonna be good.

Our venue was carefully selected, the notable Underworld in Camden was the epicentre of the alternative music scene in England – it provided a big enough bar (important) and enough space to accommodate a few merch booths for brand partners such as Insert Coin clothing and Rebel Distillery.

Bethesda even designed a bespoke poster for the occasion which was replicated in all branding opportunities: beer mats, banners, and digital ads. 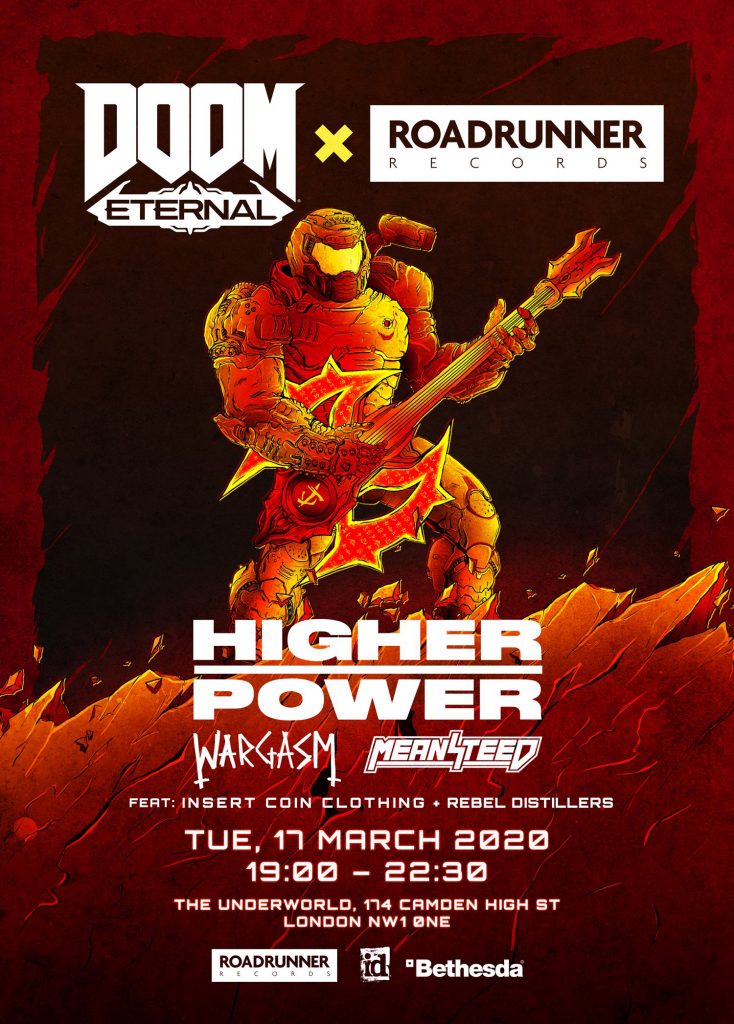 It was all set to be an awesome gig, tickets were free on Eventbrite, and 200 went within 90 minutes. A further 100 tickets were released, and all were sold within the next 45 minutes.

Everything was organized at breakneck speed; the stage was set, fans of the game and bands were PUMPED and the band was practicing DOOM riffs and covers of their iconic songs.

DOOM was imminent… more so than we realised.

In films, everything goes into slow motion when there’s a pivotal point in the story. You see the dominoes fall at a glacial speed, giving the sense that you can stop the impending result but really, you’re helpless. China fell, then Italy (this is sounding like an awesome apocalypse film by the way), and then England went into high alert to reduce the spread of this virus that was creeping to our shores. Finally, America succumbed and within Bethesda, instructions were very clear. Cancel any activations where there was a risk of spreading the virus further. Fans and staff are too important.

We were crushed. Our DOOM event was… well… doomed.

I went into fix-it mode; any good Project Manager worth their salt has a switch that gets activated when shit hits the fan. We look for the positives, we look for solutions and we look to recover.  I forged a contact with a live-music streaming service, however, all the budget had been spent by this point.  Devastated.

We just know, it was the greatest gaming/music/crossover gig that never happened. Probably.

So Why Write About It?

It was clear from the first concept formed by Bethesda that this was going to be a hit, not just because of the iconic soundtrack of the previous game, or the cult following of Mick Gordon, but because the music-game crossover hasn’t really been explored in all its bass tones.  We’ve seen the orchestral performances of soundtracks such as Distant Worlds: Music from Final Fantasy and enjoyed the gamer-musicians who incorporate both their passions into one.

This activation felt as though it was scratching an itch we never knew we had… maybe there’s mileage in that.  It’s definitely something we, and our colleagues in the record labels, are keen to explore.  Let’s see what happens next…

Got an activation or a project that might be crazy enough to work? Jessica’s your girl… contact us to see how we can make it a reality.